Baseball may be the American pastime, but it looks a lot different in Korea.  Oh, the game is played just the same.  It’s the fans and the atmosphere that keeps your head on a swivel.
The first thing you notice about the fans is their energy level and their capacity to make a lot of noise.  The cheering never stops!  An American just listening to the fans may have thought homeruns were being hit one right after the other.  Each team has a “cheerleader” (for lack of a better term) who is constantly leading the fans in various chants.  While I don’t understand the Korean language, some of the chants or music were recognizable – including a rally to the theme song for “Inspector Gadget.”  Meanwhile, the fans are all armed with thundersticks, just to ratchet up the noise quotient.
Now, inside and outside the ballpark you will see plenty of vendors selling food, but the only thing you will recognize is the bottled water.  There are no peanuts, hotdogs, pizza, or popcorn.  Instead, you have a selection of sushi and dried squid.  You can bring your own food – and people bring fruit and sushi and dried squid.  Don’t fear – beer is universal and sold here too.
I found the mascots to be a bit different.  On our game day, we came to cheer the home team, the Doosan Bears.  Their mascot – two bears.  A boy bear and a girl bear.  But, these weren’t your average bears.  First of all – they wore only bear heads, and then were dressed like regular people from the neck down.  But, it was the dance they performed to rally the crowd that left me with my mouth agape.  It wasn’t exactly child friendly.  I would best describe the dance as provocative.  The main moves were hip thrusts and pelvic gyrations.  The finale included the boy bear down on his knees tearing his shirt open.  Huh?
I came out for a baseball game and I can tell you the Bears won – but I have no idea what the final score was.  The action on the field became secondary – I was so taken by the atmosphere.  And, I can tell you this won't be my last ballgame. 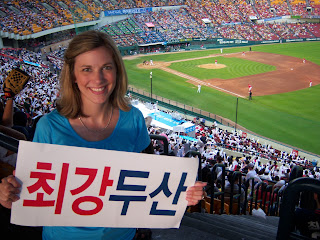 This sign proclaims that the Bears are the best!  The signs were passed out to all the fans. 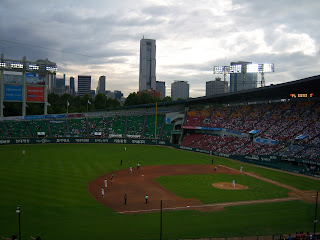 It may look similar, but the stadium was smaller than a typical US ballpark. 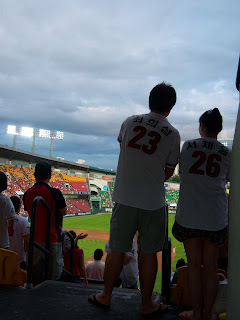 I liked this picture of the back of the baseball jerseys.
Posted by Lauren at 9:22 PM