I know I’m a relatively intelligent person.  But, my confidence is wavering.  Simple tasks in life are suddenly monumental in Korea.

Here’s the first problem, I have no idea what it says.  It’s a long series of numbers and Korean characters.  I don’t even have the benefit of a monthly usage bar graph.  The only thing I can decipher – how much to pay and when it’s due.  I guess they really want their money!  (By the way – when the bill first appeared in my mailbox, a consultation with a Korean co-worker was necessary to discover that this was in fact, my electric bill.)

So now…how to pay this bill?  I do now have a bank account in Korea.  But, they don’t do checks here.  The bill doesn’t even come with a return envelope.  Go online you say…nope.  Either you transfer money directly from your account or you go to the bank to pay a bill.  For instance, the electric company has an exclusive contract with a particular bank, so I can walk into that bank to pay my bill.  Keep in mind – I’ve learned all of this bit by bit.

So, this week I set out to pay my bill.  Except…I forgot exactly which bank to go to.  Was it KEB or KB?  Let’s try KEB….nope.  I showed them my bill and they gestured across the street.  I stopped in my bank just to make sure, where I know some tellers speak English.  They confirmed – yes, go across the street.

So, now I’m at bank number 3 – the correct bank.  I go to the teller, hand her my bill and passbook.  She looks baffled.  Yes, I’ve handed her the passbook to another bank (my bank) figuring she will use my account number to make the transfer.  She’s speaking rapid fire Korean to a co-worker and I know I’ve done something wrong.  Turns out – the bank will only accept cash in person.

So, now I’m back at my bank.  From here, I know I can make a transfer for a fee.  I wanted to be smart and avoid the fee.  Not so smart, I guess.  But at least my bill is paid.

This is what I like to call a small victory!

Other small victories include…


You get the idea.  Life here can be humbling, for sure. 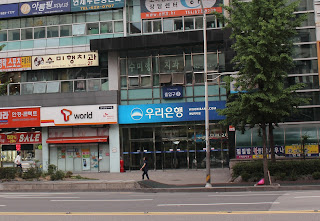 That's my bank across the street (in blue).  A total of 4 stops were made to pay my electric bill. 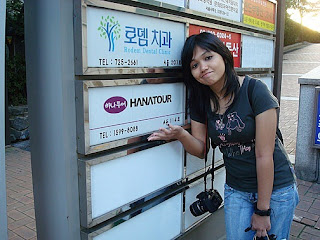 "HanaTour" means Number One or First Tour, but only if you speak Korean!  In fairness, they tried to help, but after calling countless agents, we ended up going it alone. 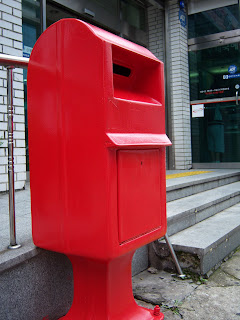 A post office box.  They are all red here, as I discovered when I finally found the post office!  The almost absolute absence of street signs makes naviagation difficult.
Posted by Lauren at 9:16 PM