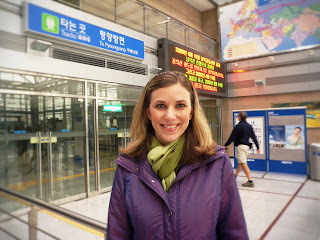 (Sign to Pyongyang, North Korea behind me at Dorasan Station)
Dorasan Train Station:

Travel into North Korea isn’t possible for South Koreans.  But, there’s a symbol of hope that this will one day change.  Dorasan Station was built in 2001 to connect the north and the south via rail lines.  Signs in the commuter station show this is the way to Pyongyang, North Korea’s capital city.  But, inside security stations are unmanned and rows of seats remain empty.  The trains are not running.  I bought a train ticket for fifty cents – for now tickets are sold strictly as souvenirs.  With tensions still running high right now, I wonder just how long it will be before this station is ever in use. 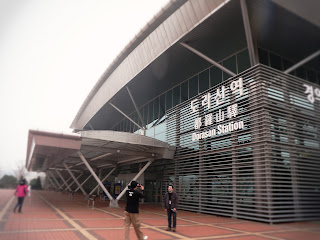 (Exterior of Dorasan Station)
The Third Tunnel of Aggression:

As part of most DMZ tours, you will take a walk underground into the Third Tunnel of Aggression.  Discovered in 1978 this tunnel was dug by North Koreans, evidently as a means for a surprise attack.  After putting on our hard hats, we were able to walk down into the third tunnel which is just over a mile long and runs under the DMZ.  It’s only 30 miles from Seoul.  If completed, the tunnel would have allowed up to 10-thousand armed soldiers to cross into South Korea within an hour.  Three similar tunnels were found, and it’s believed many others exist.  Walking down here was fascinating and eerie.  I will say, walking back above ground was exhausting. 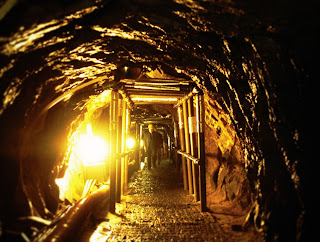 (A view from inside the tunnel.)
Dora Observatory:

Located on Mt. Dorasan, Dora Observatory allows people to look across the DMZ to get a rare glimpse of North Korea.  I’m told that you can see the North Korean propaganda village, which flies one of the largest flags in the world.  I’m also told you can see an industrial complex in the city of Kaesong.  Unfortunately, I didn’t see any of these things.  The fog on the day of our tour was so dense there was no view of North Korea, even using the observatory binoculars.  This was a disappointment, and may be cause for me to spend another $77 to go on the tour as the general public cannot enter the DMZ area without an escort. 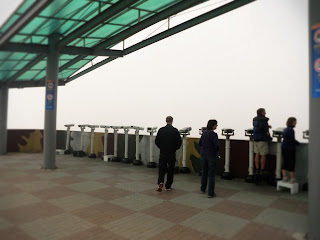 (All I can see is North Korean fog.)
Overview:

When we decided we would move to South Korea, I knew I wanted to visit the DMZ.  It’s the most heavily fortified boarder in the world…it’s a country divided…it’s the mystery of the North….it’s the threat to our security…it’s living history.  All of this was pulling me toward the DMZ.  I wanted to see this with my own eyes.  Now that I have, I wouldn’t mind going back for another look and some more time to reflect. 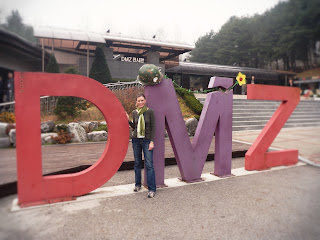 (Outside the Third Tunnel of Aggression)
Posted by Lauren at 6:37 PM