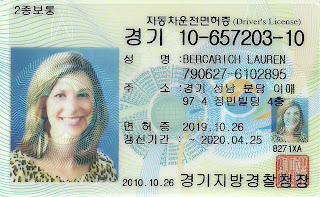 When I was 17 nothing mattered more than having my driver’s license.  It was oh, so important.  It was my ticket to freedom.

But, I never had any plans to drive in Korea.  We have the subway a block away from our home…that was my ticket to freedom.  I didn’t want a Korean driver’s license and I certainly didn’t want a car.  Guess what?  I now have both… and the insurance, gas bill, and repairs that are part of the package deal.  Why, you ask?

Our extended family in Korea moved – it was only a 25 minute drive to their new digs, but a hellish two hour bus ride each way.  Without a car, that was our only option to see them.  So, when they decided to sell their beater car…we reluctantly bought it.

Yes, I didn’t want the expense of driving, but more than that; Korean drivers terrify me.  Overall, traffic laws are the same as in the USA.  The problem is people don’t abide them.  It’s common for people to run red lights – they often treat them like stop signs.  Signaling to change lanes is unheard of.  And, apparently you can make a u-turn anywhere you want.  Now let’s throw mopeds into the mix, which abide no rules and even hop up onto the sidewalks if it’s more convenient.  Oh yeah, and then you have to figure out where you’re going!

Fully aware of what we were getting ourselves into – we went to apply for our driver’s license.  It ended up being quite an affair of red tape that included a visit to the US Embassy and lots of paperwork.  You would have thought we were applying for citizenship.  The final step was a written test.  I almost burst out in nervous laughter mid-way through the exam.  I was surely failing.  Well, almost.  I barely passed with a 65. (To make myself feel better I would like to say at 17-years-old I got a 98 on my driver’s test…the highest in the class!)

So, for our inaugural drive, we go out to the car and - drum roll please - the battery is dead.  I’m instantly rolling my eyes wondering again why I have a car.  The next day I bought some jumper cables and a quart of oil to keep in the car…just in case.

The good news is after a jumpstart we made it to our family’s home safely without any wrong turns!  We’ve since ventured into Seoul for shopping and next on the list is a long distance trip.  Cameron has big romantic ideas about driving throughout the country.  I picture us getting lost – but I guess that’s part of the experience.  Hey, it could end up being fun or at the very least it will be memorable!
Posted by Lauren at 10:40 PM

Email ThisBlogThis!Share to TwitterShare to FacebookShare to Pinterest
Labels: Driving in Korea, Korea