I can now say I’ve been to North Korea.  This weekend I walked into North Korean territory, if only for a few minutes.  This odd experience was part of a tour to the DMZ and JSA.

So, first here’s a brief explanation.  The DMZ (Demilitarized Zone) is the most heavily fortified border in the world.  It’s a 4km wide swath of land that cuts across the Korean Peninsula, separating South and North Korea.  It’s essentially a buffer zone to ease tensions between the two countries.  On either side of the DMZ are military installations.  And in the middle of this is the JSA (Joint Security Area).  This is where truce talks were held after the Korean War and where both sides still meet for negotiations.  In July, both US Secretary of State Hillary Clinton and Secretary of Defense Robert Gates were here in a show of solidarity with South Korea. (Read more here on their visit)

The buildings at the JSA are small and somewhat shabby, but their history is impressive.  It’s named the“Joint” Security Area for a reason.  On one side of the room you’re in South Korean territory.  Cross the center line and you’re in North Korea.  So, this is where I ventured into this secretive state.  Our escorts were US soldiers (about 30,000 US forces still remain in South Korea) and we were simultaneously guarded by soldiers from the Republic of Korea (ROK).  The ROK soldiers are dressed in their Class A uniforms.  They wear sunglasses in order to show no emotion and they stand absolutely still, maintaining a Taekwondo fighting stance.  They are facing and watching North Korea.

That means North Korean soldiers were facing us.  In fact, our tour group had a highly unusual experience where more than a dozen soldiers marched right up to the dividing line.  While we were snapping pictures of them, each North Korean soldier posed for a picture with us in the background.  The tour guide said she had never witnessed this behavior before.  ROK soldiers quickly radioed in this unusual behavior.  (see my video posted)

While we don’t know what these pictures were for, we were given strict instructions about our behavior in the JSA.  We were told not to communicate with North Korean soldiers in any way.  It seems obvious, but this also means no nonverbal communication or gesturing.  We were assured that we were being watched and photographed and that ROK/USA forces didn’t want us to do anything that could be used as propaganda for the North.  In fact, a man on our tour who was making the peace sign for a photograph was quickly and harshly scolded by US troops.

This is not a place to joke around.  Tensions still run high.  In fact, about 10 days ago North Korea fired two shots at a ROK/USA military guard post.  The ROK responded by firing two mortars.  This is just the latest violence in a year of rocky relations between the two countries, who are still technically at war.

Being in the JSA was an incredible experience.  This is living history – the danger, the tension, and the negotiations here are still ongoing.  Seeing the troops on both sides made the conflict between this divided nation really hit home.

USO Tour:  My understanding is the USO is the only organization that can take groups into the JSA.  For civilians, the tour is $77.  To book a tour or lean more, click here to go to their website. 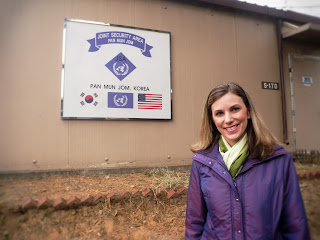 Inside Panmunjom, the JSA 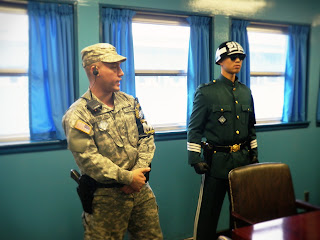 Our US Army guide and ROK soldier in a Taekwondo fighting stance. 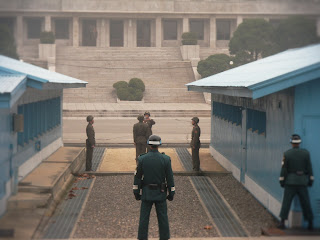 North Korean soldiers posing for pictures at the boarder inside the JSA. 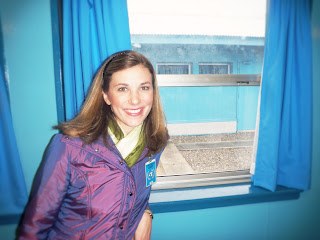 I'm in North Korea.  You can see the concrete dividing line outside the window.
Posted by Lauren at 7:57 AM