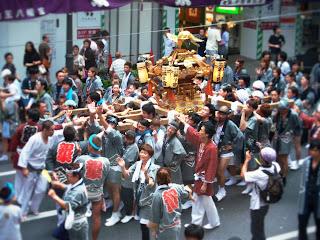 Our travel guide noted that festivals are so common in Japan, there’s always a good chance travelers will stumble upon one.  I’m so glad that we did.

We were eating lunch in Tokyo when we first heard the drums beating, signaling their arrival.  Looking down from our second story window we had the perfect view as dozens of men and women came dancing down the street proudly carrying a golden shrine on their shoulders.  Each portable shrine was attached to wooden planks so that about 40 people could carry this holy object.  And one group was quickly followed by another group…with another shrine.

We quickly finished eating to join the crowds at street level.  The festival participants were dressed in cotton kimonos.  They seemed tireless as they bounced the shrines above their heads all the time chanting, the goal being to draw more power to their gods.

Soon, an even larger shrine was wheeled through the streets followed by speeches and prayers.  I can’t say I understood them, but it was still wonderful to hear.  I’ve seen similar shrines before in a temple, where they’re typically housed and worshipped.  But this was different.  We were catching a glimpse of a Japanese tradition.

I’m starting to discover that some of the most wonderful travel experiences simply can’t be planned or scheduled in advance. 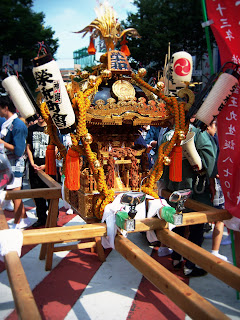 Here's a close up look at one of the portable shrines carried through the streets of Shibuya. 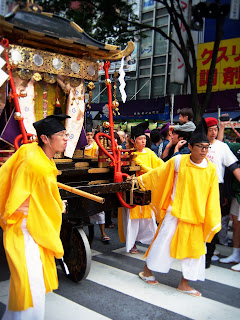 The larger shrine, being wheeled down the street.
Posted by Lauren at 5:43 AM