Traveling through different Asian countries this year, there's always been a time or two when someone asks you to pose for a photograph.  Simply because I'm a foreigner, there's a fascination that is apparently satisfied with a photo.  Still, I wasn't prepared for the attention I would receive in China.  Visiting Tiananmen Square and The Forbidden City in Beijing,  I was approached by many people wanting a photo.  Holding babies, shaking hands, and striking a pose I felt like a politician!  I was surprised by people's curiosity and affection.  This interaction with perfect strangers was a lot of fun, and something I'm always remember about China.
Posted by Lauren at 8:57 AM 2 comments:

For almost 500 years The Forbidden City (also called the Palace Museum on some maps) served as the home of China's emperors and their households.  It was strictly off limits to most people and that's what makes visiting it now so intriguing.  We enjoyed our trip to the Forbidden City.  I would say it was both exciting and exhausting to walk the grounds.  Here's one of the tips you'll see on my video -- Bring your walking shoes because the palace covers about 180 acres.
Posted by Lauren at 7:58 AM No comments:


We started our tour of China at Tiananmen Square, a symbol of China that is both famous and infamous.  It's the largest public square in the world.  I've read the size of the square was to show the power of the Communist Party and maybe also of China.  It's a concrete behemoth with massive statues and buildings flanking it.  It's not beautiful, but it is impressive.
Tiananmen Square is probably most known for the massacre in 1989 when the government forcefully put down a pro-democracy rally by bringing in troops and tanks and killing hundreds of people and injuring thousands more.  It's still clear today that any insubordination will not be tolerated.  This may be a "public" square, but you are not free to do as you please.  A security check is required before entering the square.  There are strict opening and closing hours and guards keep you from actually getting close to any monuments.  In fact, there's a strong military and police presence here.  There are also undercover military officers amongst the crowd.  You know this, because some stand in plain clothes at attention with the military.  My guess is it's their way of letting you know, anyone could be a soldier.  During our time on the square we saw soldiers march in unison across the square for what reason, I can't say.
We also saw a man run through the protective ropes surrounding a monument.  He didn't hurt or threaten anyone, but he was promptly tackled by police.  He fought back, but he was outnumbered and within minutes was shoved into a van and taken away.  As police quickly went to tourists to see their cameras and what pictures they had captured, we made a hasty exit.
Now, this isn't the only picture of Tiananmen Square.  It's was filled with thousands of happy tourists on our visit, most of them Chinese, clearly excited to visit their capital city.  They posed for pictures before Mao's portrait and proudly waved Chinese flags in their photos.  More than a dozen of them happily grabbed us to pose for photos together.  No translator was necessary.  I held children, shook hands, and posed for many photos.  I guess we were part of the atmosphere too.
Posted by Lauren at 6:34 AM No comments: 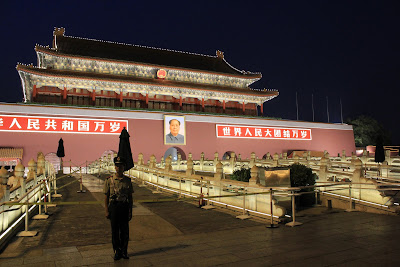 As we travel through Asia I'll be sharing my favorite pictures.  Today, July 4th, was our first day in Beijing, China.  We're staying about a 15 minute walk from Tienanman Square - so of course we had to go take a look!
Posted by Lauren at 10:00 PM No comments:

Email ThisBlogThis!Share to TwitterShare to FacebookShare to Pinterest
Labels: China, Picture Of The Day

When I moved to Korea there was so much to figure out -- getting cellphones, opening a bank account, paying my electric bill, buying furniture, applying for a driver's license...the list goes on and on.  When you're in an unfamiliar place and you don't speak the language all of these small tasks can become mind-boggling and frustrating.

I was lucky though, because I had help from my amazingly efficient sister-in-law, Kimberly, who just happens to run her own business called "Kulture Concierge."  I can't say enough about how helpful this has been to me and my husband - it's literally made our life in Korea more enjoyable, because it reduced stress and frustration.  So, for a few bucks, maintain your sanity!

What can Kulture Concierge do?  Essentially, this company can help expats living in Korea with just about anything.  Here's a brief introduction to the company from its website:

"Kulture Concierge can be your personal assistant in this foreign culture.  We can help you purchase event tickets, create custom tours, make travel arrangements, help you find anything you need in your area such as a hair-stylist, auto mechanic, or doctor, arrange for moving assistance, set up utilities (electricity, gas, telephone, internet), get a cell phone, give you a personal neighborhood orientation, help you register a new car or get your drivers license, find hard to locate items, do your shopping, event planning, document translation, coordinate delivery service and on and on and on.  Whatever you need help with, we are here to make your life easier."

My husband and I just spent 5 days in and despite the days of rain that prevented us from lying on the beach (argh!), I really like this city.  It has a different flavor than .  It’s more approachable, the people a bit more friendly, and very easy to get around.  With unique neighborhoods and beaches Busan has a lot of personality.  Plus, if you like fresh seafood…this is the place to go.
So, I wanted to share two of my favorite spots.  If you’re planning a trip to Busan you can watch my videos for directions on how to get there.

:  Sure, you can sun yourself on ’s soft sand or swim in the tranquil waters.  But, a great time to visit is after nightfall.  is a true urban beach.  Just a few steps from the sand, you’re on a city street.  At night, these businesses, hotels and restaurants are aglow in neon colors.  Those colors reflect off the water.  That paired with the lit “,” really make for a nice atmosphere and great photo opportunity.

:  What makes this temple so unique is the beauty of the natural setting.  The temple was constructed on huge rock cliffs overlooking the ocean waves.  It can be magical to hear the melody of the sutra chanting from the temple mixed with the sound of the ocean waves.  This Buddhist temple has dozens of statues and sculptures.  While I’ve visited many temples in , this one stands apart and shouldn’t be missed.
More To Do:  Of course, there’s much more to see in Busan.  The Jagalchi Fish Market, , and are just a few examples.  We enjoyed a great hike into the woods that afforded us great views of Busan.  You can also explore some new food dishes in Busan.  We tried Nakji (raw octopus) at the fish market.  The just sliced up octopus pieces are still squirming on your plate and the little suction cups will stick to your tongue.  My husband savored the wiggly pieces while I quickly chewed one up and consider it a badge of honor to have done so!
So great atmosphere, unique food, and beautiful beaches…on a sunny day make Busan a worthwhile stop on your Korean journey.
Posted by Lauren at 10:25 PM No comments: